Many years ago I began to think of opening a shop. 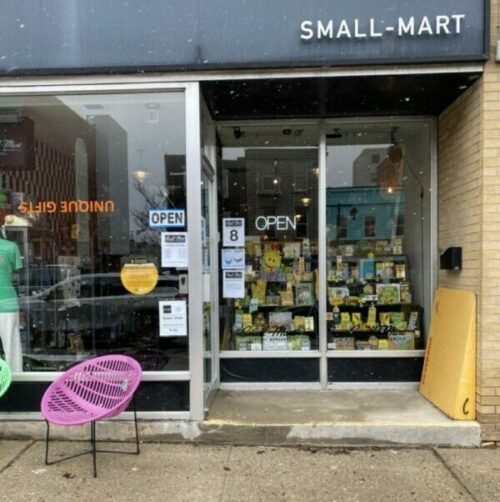 Retail business was changing rapidly across Canada and the world. Independent Mom and Pops were dropping like flies. Chain stores were invading in increasing abundance. E-commerce giants were getting more and more aggressive. And the big box was getting bigger. I started to think, what is the opposite of the big box? And what is its place in the contemporary retail landscape if it has one at all? Was small independent retail quickly becoming an anachronism?

The world changes, I get it. But does that mean we should just resign ourselves to emptying downtown cores, urban sprawl, and the loss of all that is unique?

The name came first. I wanted to create a general store concept with a slightly retro vibe, something that may have been “modern” in the 40s or 50s at the zenith of independent retail. And something that described its diminutive size. Small-Mart seemed to fit the criteria. I added General Mercantile to the end so it wouldn’t sound too much like a convenience store.

I wanted to offer a range of products in keeping with the general store idea (retro candy and soda), some products from Canadian companies (Herschel, Red Canoe), and some novelty and gift items from some of the various young artisans and companies we had encountered over the years buying for our main retail business, Bradshaws.

I wanted to invoke a sense of nostalgia without it appearing contrived, to create an environment that like so many small retail businesses is not just a place to buy things but an experience. A contemporary shop with a gentle nod to the past, reminiscent of one of the extinct newsstand/tobacconists that existed in my childhood that were a combination of things appropriate to my age (candy, novelties), inappropriate (pornographic magazines, cigarettes) and somewhere in between (Mad Magazine, video games, rubber vomit). I loved those places; my mother, not so much.

So Small-Mart was born in a concrete hallway in downtown Stratford, Ontario. I had noticed a small space that had been empty for some time, not a very desirable one because it was not a street front location and needed a lot of work. As the shop was a bit of an experiment, I didn’t want to have a large investment in it. So, I worked something out with the landlord and, with the help of a few friends, renovated the space.

We opened in June of 2010 and ran the shop from that location for the next four years. We liked to think of the store as a hidden gem and described it as “off the beaten path in more ways than one.” Although this contributed to its charm, the fact is that even though we had developed a loyal local following, we weren’t attracting many of the visitors to Stratford, who either walked right by our hallway or were suspicious about being lured towards an unknown destination. We began looking for a new home for Small-Mart.

In 2014 a storefront opened up in the same building adjacent to the old space. So, I jumped on it. We had learned a few things in the years we had been open, what was working and what we needed in terms of display space and merchandising. We could renovate the space to properly house our best lines. It afforded us the opportunity to put in proper window displays and for the sales staff to see the light of day.

2020 marked Small-Mart’s 10th anniversary. And aside from the good things the past has to offer, we haven’t looked back.